Background: The alternative of oil is highly essential in the present context due to the acute shortage of oil as well as increasing demand for it from different public and private sectors. Since 1980, attention has been focused on coal-water slurry as an alternative fuel for the power generation industry and a suitable substitute for oil in several industrial applications. One of the exciting areas in Coal Water Slurry (CWS) is coal–water-alcohol slurry in which different alcohol compound can act as a dispersant for the stabilisation of coal–water slurry.

Objective: The objective of this paper is to prepare a high concentration coal–water-alcohol slurry using glycerol, glycol and ethanol as an additive, and different particle size distribution of coal. This will increase the surface activity of the coal thereby, decreasing the viscosity of the slurry.

Result: From the experiment, it has been concluded that the optimum addition of glycerol in water is taken as 90:10 of water and glycerol ratio because after that, there is no further decrease in the value of viscosity. An optimum value of glycol and ethanol mixed in water was determined and found as in the ratio of 86:14 and 82:18, respectively.

Conclusion: From different parameter studies like coal concentration, pH, temperature, apparent viscosity and stability, it has been concluded that coal-water-glycerol slurry is better than other coal water- alcohol slurry. This is because of the presence of more OH- groups in glycerol. The static stability of this coal-water-alcohol slurry exists for the maximum period of 31 days. 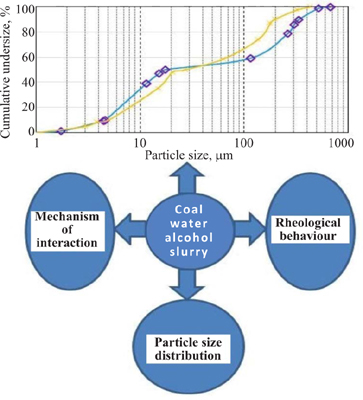