Objective: The aims of the current study are to develop the optimized adsorption conditions of Pb2+ by an MCM (Mobil Composition of Matter)-48 mesoporous molecular sieve material and study the properties of this adsorption.

Methods: First, an MCM-48 mesoporous molecular sieve was prepared by the hydrothermal method by using cetyltrimethylammonium as the template and tetraethyl orthosilicate as the silica source. The prepared sample was characterized by powder X-ray diffraction and scanning electron microscopy. Then, a harmful heavy metal Pb2+ was adsorbed by MCM-48. Effects of acidity, contact time, temperature, the initial concentration of lead(II) and the dosage of adsorbent on the rates of adsorption were studied, and the optimum adsorptive conditions were obtained.

Results: The results show that when pH value was 4.5, the temperature was 18 ± 1°C, contact time was 40 min and m(MCM-48): m(Pb2+) = 2.5 (mass ratio), the adsorptive effect was the best, the adsorption rate was 96.71% and the adsorptive capacity was 386.84 mg/g. After the kinetic calculation, it was known that the process of the adsorption of Pb2+ by MCM-48 conforms to the pseudo-secondorder kinetic equation. Thermodynamic calculation shows that the adsorption is an exothermic process. The adsorption obeys the Freundlich adsorption isotherm equation. Nitric acid, hydrochloric acid and acetic acid were used to study the effects of desorption, indicating that the desorptive effect was the best using 0.1 mol/L of nitric acid as a desorptive agent. At the time of desorption 6 h, its desorptive ratio was the highest and reached 71.11%.

Conclusion: This method is an alternative for removing harmful substances containing lead, which has a potential for application in processing lead-polluted waters. 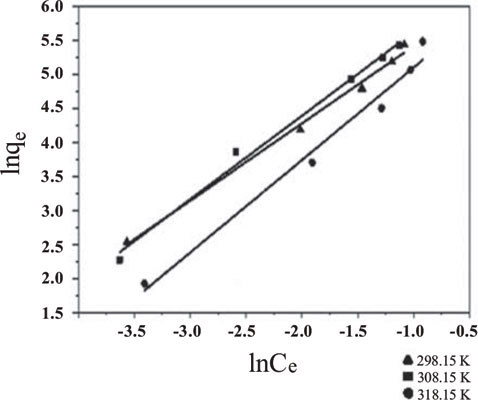